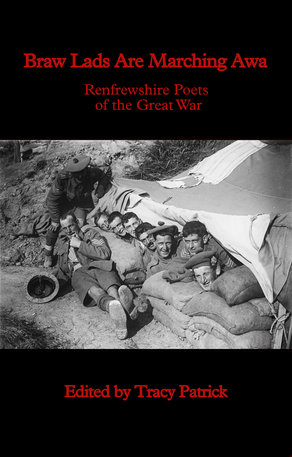 ​This anthology of poetry from the Renfrewshire archives charts the history of the Great War through the eyes of those who lived it. Published in the Paisley & Renfrewshire Gazette 1914-1918, these are the voices of those who experienced the front line, and those who waited at home. Poignant, heartfelt, witty and uniquely Renfrewshire, this is the first time these poems have been aired since they were read by the people of the district over one hundred years ago. In putting this collection together, I feel like I have journeyed with whose experiences I aimed to document. It is as much a testimony to the human spirit as it is to the continuing horrors of war.

'Having delved deep in the archives, Tracy Patrick presents this evocative collection of First World War poetry with a Renfrewshire connection. Sometimes patriotic, sometimes cynical, and even darkly comic, but often grim and tragic, these voices from the "Great War" speak to us of hope and loss.' ​Louise Turner, author and archeologist.

'The human spirit of strength and bravery and stoicism in the worst of circumstances shines through these poems. The fact that so many young soldiers were moved to write poetry about their horrendous war experiences says much about the wrongness of war itself. A fine anthology.' Betty McKellar, poet.
£8.00
​Other stockists:
​Waterstones
​White Cart Company
​Amazon
​Paisley Abbey Gift Shop
​eBay